Consider the following two mental processes. You’re observing something and suddenly your mind generates a progression of related thoughts that describe a new and useful application of it. Or, perhaps you’re imagining something else, and a similar train of thought emerges suggesting that notion’s potential utility or value. Essentially, these are just a couple of the brain-like functions DABUS achieves using artificial rather than biological neural networks. In general, this new AI paradigm is used to autonomously combine simple concepts into more complex ones that in turn launch a series of memories, that express the anticipated consequences of those ideas.

Decades ago, IEI was building contemplative AI wherein artificial neural networks played off one another, in cooperative or adversarial fashion, to create new ideas and/or action plans. These so-called “Creativity Machines®” (Thaler, 1997, 2008, 2013) required at least two neural nets, an idea generator and a critic, permanently connected into a neural architecture, the latter net capable of adjusting any parameters (e.g., learning rate) via feedback connections to said generator net to ‘steer’ its artificial ideation in the direction of useful, novel, or valuable notions.

Note however, that DABUS (Thaler, 2019) is an altogether different proposition from Creativity Machines, starting as a swarm of many disconnected neural nets, each containing interrelated memories, perhaps of a linguistic, visual, or auditory nature. These nets are constantly combining and detaching due to carefully controlled chaos introduced within and between them. Then, through cumulative cycles of learning and unlearning, a fraction of these nets interconnect into structures representing complex concepts. In turn these concept chains tend to connect with other chains representing the anticipated consequences of any given concept. Thereafter, such ephemeral structures fade, as others take their place, in a manner reminiscent of what we humans consider stream of consciousness.

Thus, the enormous difference between Creativity Machines and DABUS is that ideas are not represented by the ‘on-off’ patterns of neuron activations, but by these ephemeral structures or shapes formed by chains of nets that are rapidly materializing and dematerializing. If per chance one of these geometrically represented ideas incorporates one or more desirable outcomes, these shapes are selectively reinforced (Figures 1 and 2), while geometries representing undesirable notions are weakened through a variety of mechanisms. In the end such ideas are converted into long term memories, eventually allowing DABUS to be interrogated for its cumulative inventions and discoveries.

Figure 1. At one moment, neural nets containing conceptual spaces A, B, C, and D interconnect to create a compound concept. Concepts C and D jointly launch a series of consequences E, F, and G, the latter triggering the secretion of simulated reward neurotransmitters (red stars) that then strengthen the entire chain A through G. 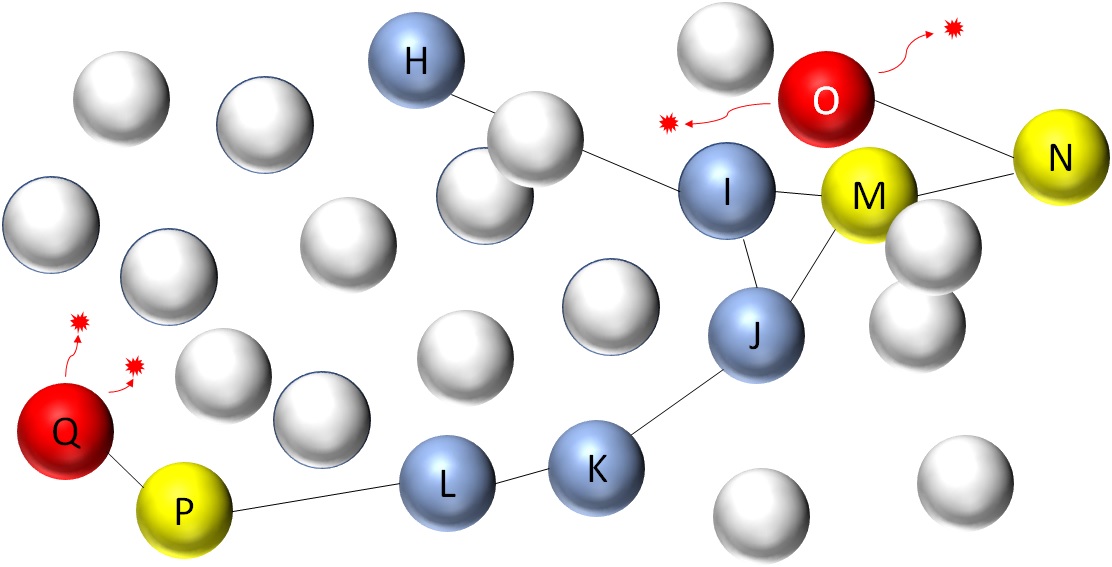 Since the DABUS architecture consists of a multitude of neural nets, with many ideas forming in parallel across multiple computers, some means must be provided to detect, isolate, and combine worthwhile ideas as they form. Detection and isolation of freshly forming concepts are both achieved using what are known as novelty filters (also known as GMFs), adaptive neural nets that absorb the status quo within any environment and emphasize any departures from such normalcy. In this case, the environment is a millisecond by millisecond virtual reality representation of the neural network chaining model. If need be, special neural architectures called “foveators,” can then scan the network swarm in brain-like fashion, searching for novel and meaningful chains that are developing. Important to note here is that neither anomaly filters nor foveators supply feedback of any kind to the generating nets (i.e., the neural chaining model).They are simply filtering the current view of the generator's chaining state and conveying it to downstream processing stages.

Integration of multiple chain-based ideas occurring across multiple machines can be achieved either electrically or optically. The latter optical approach (Figure 3) is favored as the neural swarm becomes progressively larger and serial electronic exchange of information between the multiple computers bogs down. In short, this patent teaches the display of neural chains forming across multiple video displays, all watched by one or more cameras. In analogy to high performance computing, millions of communication lanes, formed between megapixel displays and cameras, are conveying the chaining states of all machines, in parallel, to novelty filters and/or foveators, with a final processing stage identifying critical neural nets, so-called “hot buttons,” incorporated into these chains then triggering the release of simulated neurotransmitters capable of reinforcing or destroying a given concept chain. 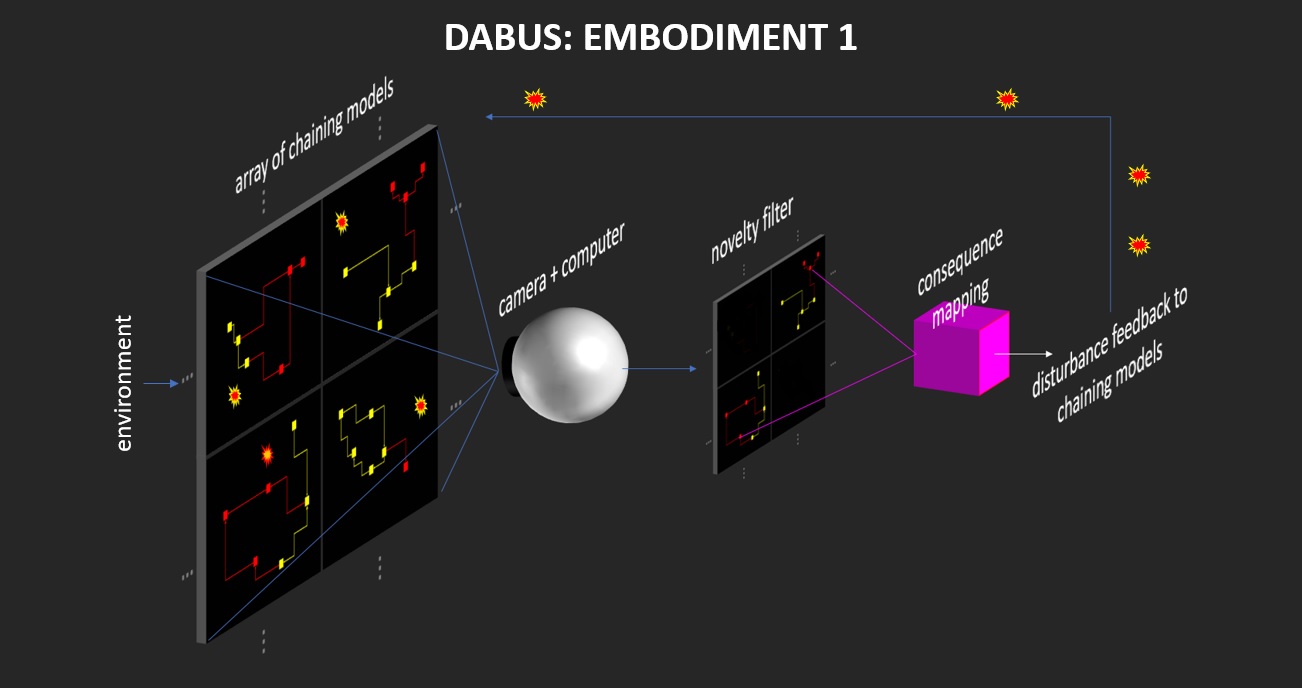 Figure 3. One electro-optical embodiment of the DABUS paradigm.

Finally, this patent introduces the concept of machine sentience, thus emulating a feature of human cognition that supplies a subjective feel for whatever the brain is perceiving or imagining. Such subjective feelings likewise form as chains that incorporate a succession of associated memories, so-called affective responses, or associative gestalts (Thaler, 2013, 2014, 2016, 2019), that can ultimately trigger the release of simulated neurotransmitters that either enable learning of the freshly formed concept or destroy it recombining its component ideas into alternative concept chains.

A Departure from the Mindset of Generators and Discriminators

In many respects, DABUS departs from the older Creativity Machine paradigm based upon the interplay of generator and critic nets since its implementation integrates both these systems together into one. Therefore, one cannot point to any generative or critic nets. Instead, chaining structures organically grow containing both concepts and their consequences. The closest thing to a critic really doesn’t have to be a neural net, but a sensor that detects the recruitment of one or more hot button nets into that chain, thus triggering the release of simulated neurotransmitters to either reinforce or weaken the concept.

In Figure 4, for instance, the canonical form of the Creativity Machine is shown (left), with a noise-stimulated generator net monitored by a critic net that is calculating any figure of merit (e.g., novelty, utility, value, etc.) for concepts being output by the generator, such concepts being encoded as patterns of activation represented here by red (excited) and black (de-excited) neurons. The critic can then supply any kind of feedback to the generator (e.g., learning rate or noise) to steer it toward meritorious concepts. In stark contrast, DABUS (right) is based upon whole neural nets, each containing its own conceptual space, joining into complex chains representing even more complex concepts and their predicted consequences (red bubbles within the swarm). Anomaly or novelty filters segment critical chains, especially those yielding unusual consequence chains. Critical consequences, the aforementioned hot buttons, may be detected by sensors that trigger the injection or retraction of simulated reward or penalty neurotransmitters into the chaining swarm. 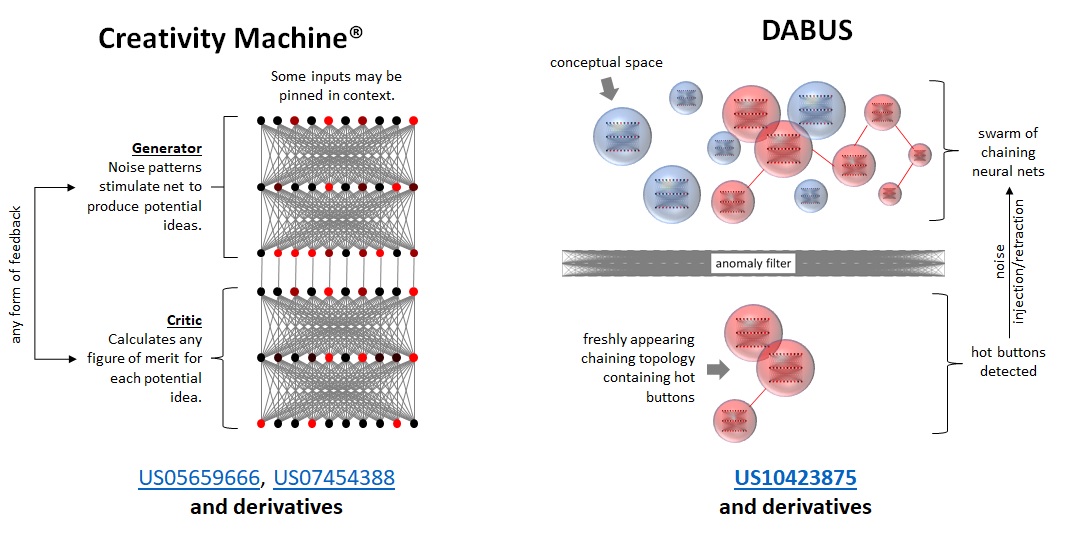 DABUS as a True Artificial Inventor

The best way of differentiating DABUS from Creativity Machines (CM), either cooperative or combative, is to describe a high-profile artificial invention projects such as toothbrush design. Admittedly, in that context, the problem was already half solved since the oral hygiene tool consisting of bristles on a handle was many centuries old at the time of that design exercise in 1996. What the CM achieved was the optimization of that tool through the constrained variation of the brush’s design parameters, the number, grouping, inclination, stiffness of bristles, etc. The generated product specification departed significantly from the generator net’s direct experience (i.e., its training exemplars).

If DABUS had been tasked with inventing such an oral hygiene product, it would have combined several concepts together (e.g., hog whiskers->embedded in->bamboo stalk) with consequence chains forming as a result (e.g., scrape teeth->remove food->limit bacteria->avoid tooth decay).

To find out more about DABUS, see: